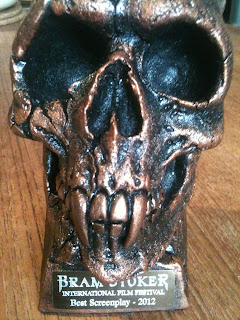 I think I mentioned below that I've never won a prize. Well, I have now. BEFORE DAWN is Jo Mitchell and Dominic Brunt's film - between them they starred in it, directed it and wrote the story. They asked me to write the screenplay, and I loved the experience. It's been getting a great reception in festivals, and now this. There'll be a limited theatrical release and a DVD next February. Not to be missed. (If you like zombies.)
Posted by Mark Illis at 9:28 AM No comments:

A whole supplement in The Guardian last weekend, about how to write a novel in 30 days. And nothing in there, I bet, about the tricky business of Epigraphs. Many years ago, I wanted one for my second novel, The Alchemist, so I started by thinking about poetry I knew by heart. That didn’t get me very far.

I think I remember that because I like the direct address, the acceptance that real life doesn’t slip into neat files, it’s more complicated than that, more messy and various. If you know it ‘by heart’ then perhaps it’s because it speaks in some way to your heart, hits you on an emotional level.

At the round earth’s imagined corners, blow
Your trumpets angels and arise, arise
From death, you numberless infinities of souls,
And to your scattered bodies go,
All whom flood did and fire shall overthrow.

Or maybe it’s just because it’s stirring stuff, with a fantastic rhythm. You feel like you want to shout that ‘blow’ at the end of the first line.

Waking at four to soundless dark, I stare.
In time the curtain edges will grow light,
Till then I see what’s really always there:
Unresting death, a whole day closer now
Making all thought impossible but when
And where and how I myself shall die.

I’m not sure that’s right, but it’s something like that. I can remember more of it too, there seems to be quite a lot of it in my head. Death and miserableness have always drawn me towards them. But what’s my memory doing? At school we were given large chunks of Shakespeare (the seven ages of man, Hamlet’s speech involving ‘a quintessence of dust’), and the whole of the Donne sonnet beginning  ‘Death be not proud ...’ to learn, but I don’t remember more than the odd word or phrase of those. They’re presumably floating around my brain somewhere, in some dusty backroom, perhaps along with everything I’ve ever read which, as mentioned below, has just fizzled away like steam.

In the end, many years ago, I looked in a dictionary of quotations for my Epigraph, and came up with something that seemed appropriate.

A cheat, a thief, a swearer and
blasphemer, who smelt of the rope from
a hundred yards away, but for the rest
the best lad in the world.

It’s from Clement Marot’s Epitres, as you probably know, (that's a joke), and it does have some aptness, since duality is at the heart of the novel, and my young hero does some very unheroic things, but it felt like cheating to have to look it up. I’ve never used an Epigraph since, or wanted to, but I do sometimes wish I could remember a bit more poetry ...

I don’t often reread novels, but I was in the middle of the slow, sad procession of CANADA, by Richard Ford. It begins by saying he's going to tell us about his parents committing a bank robbery, and for a hundred pages or so I thought, OK, creeping sense of inevitablity, good, but for the next hundred I was thinking for God’s sake, rob the bank! I suddenly felt a desire to read BLOOD MERIDIAN again. I bought it in the Eighties, it was recommended by a friend, Adrian Curry, who worked on a bookshop on the Charing Cross Road. It blew me away, and I’ve read a lot of Cormac McCarthy since. SUTTREE, a Faulknerian rush of a book, its prose glittering and lush; ALL THE PRETTY HORSES, a wonderful start to a disappointing trilogy; THE ROAD, his masterpiece. You can get a little impatient sometimes, with his relentless examination of masculinity. There are more ways of being masculine than being either noble and taciturn or savage and taciturn. And there’s another gender out there Cormac, 51% of the world. On the other hand, this is what he's chosen as his subject. He's like a solemn witness to things most people prefer to look away from.

And what a pleasure it is to read him. You just have to take a step back and admire the sheer relentless power of BLOOD MERIDIAN. You sense him, over his career, struggling to hold despair and misanthropy at bay, that’s what makes THE ROAD so wonderful, that attempt to hold up the relationship between the father and his son as the last hope in the darkness. But the darkness pretty much conquers everything in BLOOD MERIDIAN. Even the epigraphs are ominous and admonitory. Your ideas are terrifying and your hearts are faint. And the writing seems to come from some ancient hermit, crafting strange sentences that have never been written before. It has the rhythmic cadence of the Bible, idiosyncratic syntax, very little punctuation, and a muscly prose, lumpy with flowery, unfamiliar vocabulary.

Try this – The night sky lies so sprent with stars that there is scarcely a space of black at all and they fall all night in bitter arcs and it is so that their numbers are no less. Sprent? That sentence is very nearly ridiculous, and perhaps wrenched out of context it seems silly. (What’s going on with that last clause?) But it carries itself with a dark, confident strut, and it smells of doom. Black and bitter doom. Cormac McCarthy – greatest living American writer?
Posted by Mark Illis at 10:06 AM No comments:

Up to now, I’ve only brushed up against prizes twice in my writing life. My very first published story was a runner-up in the Whitbread Short Story Prize. As a result it got published along with the winner and, I think, ten other runners-up in an anthology put out by Hamish Hamilton. It was only open to writers under 25, so there probably wasn’t a huge entry for it, but I was very excited. I was 19, I was published, I was getting started on a literary life. My girlfriend at the time put the letter from Hamish Hamilton in a cheap photo frame and yes, I actually hung it on my wall for a while.

Then, in 2009, I got longlisted for the Guardian’s Not the Booker Prize for my book, Tender. I mention it below. I didn’t make the shortlist but it was all about writers mobilising their friends, relatives, colleagues, acquaintances and family pets to vote for them, so I wasn’t too worried about that. It was nice to get a nod.

Now though, my most recent novel, The Last Word, has been shortlisted for the Portico Prize, which describes itself as ‘one of the country’s leading literary prizes’ and is for a work of fiction set largely in the north of England. It does feel good to get noticed, to find my head raised slightly above the parapet. The Last Word features sex, death and a bus falling down a hole, but my fiction’s generally quiet, it aims to be subtle and suggestive, and publishers tend to worry that they won’t be able to sell it. More than once an editor liked it, but their publicity department said No. So, thanks to Salt – who incidentally also have a book on the Booker shortlist – for taking a chance.

Does it actually mean anything? No, of course it doesn't. But it may help sales, and on the long slog, sometimes lonely, sometimes thankless, of the literary life I set out on 30 years ago, it's encouraging at least. And encouragement is important. Fingers crossed ...

Posted by Mark Illis at 4:04 PM No comments:

The Art of Fielding

In response to that post below, Going, going ... I’ve kept track of a month’s worth of reading. Anansi Boys, by Neil Gaiman; The Corner That Held Them, by Sylvia Townsend Warner; Life, Death, Prizes by Steve May; Stray by Amanda Dalton; The Forgotten Waltz by Anne Enright. That’s not a bad collection, is it? God, it’s a big chunk of my month. A lot of time spent with people who don’t exist, who inhabit made-up worlds, and have fictional problems.

I enjoyed all of them, but the one I want to talk about is the one I’ve just started. The Art of Fielding by Chad Hernbach. I’m only about 40 pages in, but I’m already loving it. It’s the book that left a hole in Jonathan Franzen’s life, apparently. That’s what it says on the cover – ‘It’s left a little hole in my life, the way a really good book will.’ What’s that going to look like? A book-shaped hole? I know what it feels like. I’ve had some bad days lately, days when you feel frustrated and got at and puzzled and infuriated all at once. Coming home on those days it’s good to hug the kids, it helps to have a couple of glasses of wine, but it’s also great to pick up a really good book, like The Art of Fielding. To sit down with it somewhere quiet and comfortable and start reading. The consoling power of literature. It’s like remembering something. Oh yes, this, it’s coming back now, it slipped my mind for a while there, but this is so much more important than all that other stuff. And in a sense this fiction, these words arranged on a page, it’s more real than that other stuff too. I relax into it, feel the stress ebb a bit, feel pleasure tentatively creeping in. That familiar dual pleasure in the story and characters first, but also in the craft, in the knowledge that you're in capable hands. I’ll miss this book when it’s gone. Till the next one.
Posted by Mark Illis at 5:09 PM No comments:

So I went to the Kings Lynn Festival. Home to Leeds, Leeds to Peterborough, Peterborough to Ely, Ely to Kings Lynn … a long journey, a jagged diagonal across the East side of the country, landing up with a load of writers in Norfolk. It’s a good weekend, you do a reading, you sit on a panel or two, you sell a few books and sign them, drink a lot and chatter with the other writers, with the friendly, enthusiastic and tireless organisers, you talk to the audience who mill around the book stall and the tea table in a generally good-humoured, curious way. And I’ve been invited to the Edinburgh Book Festival (12th August, don’t miss it), and to one intriguingly called How The Light Gets In, which is a festival of philosophy and the arts. I’m not a philosopher. I’m also not good off the top of my head. It takes me time to process stuff, to formulate an opinion and a way to articulate it. But it’s nice to be asked, it’s nice to travel round the country talking about these books I write that hardly anyone has seen or heard of before. Hello, here I am, have a look at this, you might like it ...

And back home, I’m introducing two friends who are launching their books locally. The very excellent Amanda Dalton, poet, whose Stray has just been published by Bloodaxe, and the equally excellent Stephen May, whose novel - Life! Death! Prizes! – is published by Bloomsbury. Both recommended.
Posted by Mark Illis at 11:25 AM No comments:

Mark Illis
Yorkshire based, London born, married, two children, I'm a writer of novels, short stories, TV, film and radio. This is a blog about now and then, success and disappointment, books, cancer ... everything really. @markillis1 markillis.co.uk